This is a tale of Visions and Signs from God, and of the Tiger Who Came to Tea – eventually.

Throughout history, signs and visions from a God or gods have been reported in all sorts of places: lights and cloud formations in the sky, entrails, tea leaves (in pre-teabag days!) and other natural phenomena. They often lead to amazing acts of bravery or compassion – sometimes even to being burned at the stake.

Here’s a fairly typical example of a miraculous “vision” which made the press a few years ago: 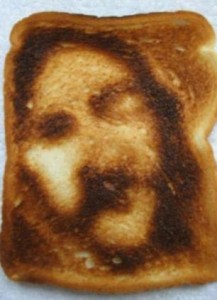 Yes – it’s a representation of a classic portrait of Jesus – on a slice of toast.

Now look at this picture: 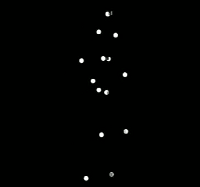 It’s just a random set of dots. But, now watch this short video:

We can’t help but “see” moving human figures doing a variety of actions: it’s just moving dots. But our brains are very good at joining the dots. What’s going on? Why do our brains trick us in this way?

In evolutionary timescales, it’s but a blinking of an eye since our hunter-gatherer days.

Imagine a scene from this period. Times are hard for the tribe. Food is scarce. Two hunters are out looking for food to kill. In the middle distance, Hunter A notices a movement in the bushes. The subtle changes of light and dark patterns in the leaves and branches alert him instantly. It’s the tell-tale pattern of movement of a tiger on the prowl. He runs for cover. Hunter B notices nothing and carries on hunting.

Nothing happens. It’s just the wind in the trees.

The same story is repeated for ninety-nine days. Hunter A is hungrier and more tired than his companion, because of all the unnecessary running around. But on the hundredth day, there really is a tiger!

So the moral of this tale is:

And that, dear reader, is an example of what Charles Darwin first called “natural selection”.