Normally, I’m not one for over-simplification. When I see TV and radio* programmes, journalists and politicians reducing a discussion to simplistic, black-and-white terms, I want to cry out: “But it’s not as simple as that….!”

Today, I’m going to break that rule completely and boil down the answer to the question:

“What does it really mean to be human?”

to some very basic concepts – three, in fact.

Let me first put this into some kind of context. Roughly speaking, human beings, our species homo sapiens, have been around for 200,000 years, with proto-humans for roughly 2 million. Over that time, we have spread from Africa over the whole planet (if you count the base station at the South Pole). And in that time, we have clearly become the “top” species in terms of our impact on life on Earth.

What is it that makes us so special? Well, clearly the development of language and “higher order” reasoning are often mentioned. Also, it’s often said that we are the only species to be aware of our mortality, but how we can know this I’m not sure!

This is all very well, but what, at its most basic, do we mean when we say someone “is only human”? Think of it in terms of a simple triangular diagram: 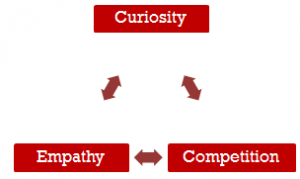 Let’s explore each of these in turn.

Curiosity, or inquisitiveness, seems the most obvious human characteristic, so much so that it hardly needs explaining. Think of the look of wonder in a small baby’s eyes at it looks at a brightly coloured toy or rattle. Or, perhaps, think of the constant stream of questions from a back-seat four year old when you’re trying to navigate heavy traffic in a strange town!

All too often as we get older, that sense of joy and wonder in discovering new things seems to fade away. Some of us slide slowly into a safe world of fixed views and prejudices, with our ideas confirmed by a narrow group of friends and an equally narrow range of other sources of information. And yet, others manage to keep that child-like sense of questioning and searching for something new, right up to the day they die.

To me, curiosity is a kind of “umbrella” characteristic which informs and energizes the other two (which is why I put it at the top of the triangle).

Moving clockwise, we come to competition, perhaps better described as our competitive spirit. It’s the drive that makes us want to be winners, to make life better for ourselves and our loved ones. From our hunter-gatherer ancestors, competitiveness is associated with masculinity, and echoes of the role division between men and women from our earlier times persist today. Competition is much loved by politicians on the right.

For me, without competition, human beings, fewer in number, would still be contentedly eating nuts and berries in East Africa and what we call civilization would never have developed.

Last, and by no means least, we come to empathy: the ability to imagine something from another person’s point of view. It’s the more compassionate, nurturing side of humanity, leading to ideas of fair play, altruism and group solidarity. Again, from primitive times, we tend to see empathy as feminine, not least because of the child-rearing role of women in traditional societies. Empathy and its derivatives tend to be the concern of politicians of the left.

Without empathy, I believe, we simply wouldn’t be here to discuss this – sometime over the past quarter of a million years, our unrestrained, aggressive selves would have wiped us off the face of the planet!

So there you have it: humanity summed up in just three words. I plan to use this framework to discuss some future topics: watch this space!

* Yes, I know you can’t see a radio programme!