The title of this blog post has echoes of the names of the sort of firm of solicitors employed by the rich and greedy to frighten and bully those weaker than themselves. But I refer instead to our government’s economic strategy since 2010, with particular reference to austerity.

Professor Philip Alston is the United Nations’ Special Rapporteur on extreme poverty, appointed by the Human Rights Council in 2014. He is a Professor at New York University School of Law with a doctorate from the University of California. He studied Law and Economics in his native Australia. Alston has worked in several roles for the UN since the 1980s. His current “job description” and background to his appointment can be found on the UN’s Human Rights website here.

Alston travelled for 12 days throughout the UK to gather information directly from a diverse group of people most affected by poverty in the UK and those working to support them. He is an experienced and acknowledged expert in his field and took time to listen to the people whom he met. His conclusions were that the government had inflicted “great misery” on its people with “punitive, mean-spirited, and often callous” austerity policies driven by a political desire to undertake social re-engineering rather than economic necessity. “Poverty is a political choice,” he said.

Here’s just one extract from Alston’s statement: “The results [of the government’s austerity policy]? 14 million people, a fifth of the population, live in poverty. Four million of these are more than 50% below the poverty line, and 1.5 million are destitute, unable to afford basic essentials. The widely respected Institute for Fiscal Studies predicts a 7% rise in child poverty between 2015 and 2022, and various sources predict child poverty rates of as high as 40%.  For almost one in every two children to be poor in twenty-first century Britain is not just a disgrace, but a social calamity and an economic disaster, all rolled into one.”

Alston’s  longer, fuller statement which also explains the methodology, can be found here. It’s worth a read!

And yet the government has wasted no time criticising his report. Mini-May Amber Rudd, recently rehabilitated by May as the new Work and Pensions Secretary, said the report used language of an “extraordinary political nature”. May’s spokesman said: “We strongly disagree with the analysis [in the report].” Alston also specifically criticised the government’s flagship welfare reform programme, Universal Credit. In this, he was adding his voice to those of a wide range of critics working with people made destitute by the changes. UC has hit disabled people particularly hard.

These criticisms are yet further examples of a government in denial. When someone criticises the effects of government policy, shooting the messenger is certainly not the right response. I agree fully with Alston’s comment that austerity was a political choice, for which former Chancellor George Osborne is principally to blame. This government, thanks to May’s mishandling of the negotiations, is totally bogged down in discussions with the EU and with bickering amongst themselves. Rising inequality and the resultant rise in poverty is just one result of a government wilfully blind to reality. And was the language extraordinarily political? Judge for yourself: the OHCHR press release is here.

Alston and Victims Hit Back 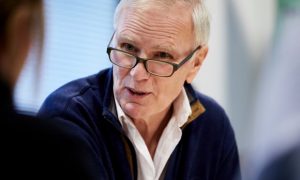 Clearly, those made poorer by government policy agree with Alston’s analysis. Of ministers, one said “They should get out of their cars. They are turning a blind eye. I was very happy with his report. He took the time to speak to everybody. He didn’t ask leading questions. He was fact-finding and the facts speak for themselves. If they are going to ignore the facts, I don’t see any way out of poverty and the food banks.” Another said “They are not in the real world. They are people who have no idea what is going on. Poverty is political. When you are suffering, you are going to get angry about it. What the UN envoy saw was anger. These people shield themselves from the anger and suffering.” And a third: “It’s a shame that Amber Rudd wants to deny our truth, although it is probably easier for her to dismiss the facts than to help fix them. The delusional approach she’s taking is absurd. I hope the government can now rectify and make a similar effort as Mr Alston to listen to how their policies are impacting on people.”

Philip Alston urged Rudd to instead act to make the welfare system “more humane” rather than dismiss the powerful language in his report. Alston told the Guardian: “I think that dismissing a report that is full of statistics and first-hand testimony on the grounds that the minister didn’t appreciate the tone of the report rather misses the point. I remain hopeful that Amber Rudd might actually take some of the steps needed to address the worst aspects of the existing approach.”

For that, we need a change of government.

1 thought on “Heartless, Spiteful and Unnecessary”