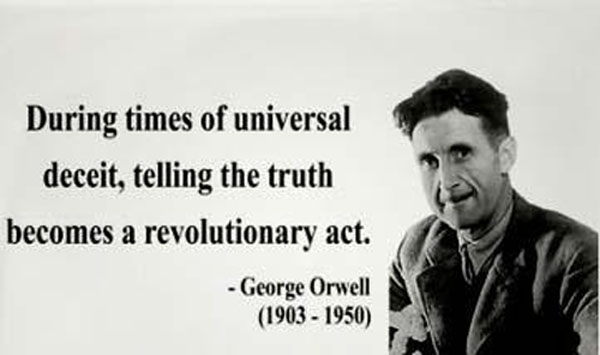 Key players in the dystopian world of George Orwell’s novel 1984 are the Thought Police. With the help of an army of willing informers and the Big Brother telescreens, the Thought Police are the means of ensuring nobody so much as thinks something out of line with official policy. In twenty first century Britain, the same ends are largely achieved in different ways. The obvious villains of the piece are those sections of the media owned by the super-rich and foreign or tax exiled proprietors. Chief executives of major corporations weigh into the debate also. But a significant part of keeping us on message is played by so-called “think tanks”, of which more shortly.

The Thought Police in action

First, let’s see how even the slightest deviation from the strict “free market fundamentalism” is policed – and fiercely so. For the majority of the post-war period, nearly all the views expressed by Jeremy Corbyn would have been seen as unexceptional and mainstream. But the FMFs have shifted the range of “acceptable” opinions (the so-called “Overton Window”) so far to the right, that it’s now easy to paint Corbyn as a radical leftie. The same happened to almost the same degree with Ed Miliband.

Some recent examples illustrate my point.

The right-wing press had a field day twice recently with things Corbyn didn’t do. The first was not singing the national anthem and the second was not bowing low enough at the Cenotaph. Closely related is the success of the “poppy fascists” in extending the period of compulsory poppy-wearing on BBC news and current affairs programmes to nearly three weeks. The underlying thought processes behind these campaigns is simply totalitarian and fascistic. Acclaimed writer Alan Bennett said much the same thing in a recent newspaper article.

An equally sinister stance was taken by the chiefs of the utility companies against Ed Miliband in 2013. He proposed the modest idea of a temporary freeze on energy prices. (Most Britons support the much more “radical” idea of renationalising the gas and electricity firms.) The response was apoplectic. The head of Scottish Power threatened an investment “strike”, the trade body spoke of “energy shortages”. Centrica threatened to cease trading. Can anyone imagine a nationalised power company in the 1960s or 70s threatening to turn the lights off just because their prices were held for 6 months?

The pattern of policing is always the same. Any minor dissenting statement is met with a shower of abuse, threats and forecasts of some catastrophe. Which brings us back to those ever-present pundits of modern political life, the “think tanks”.

Think tanks come in all shapes and sizes: by no means all of them promote the FMF agenda. Well-known left-leaning think tanks include the Fabian Society, founded in 1884 with close – and openly declared – links to the Labour party and the IPPR (Institute of Public Policy Research). Think tanks conduct research, lobby parliament, fund events and provide spokespersons for TV and radio. Some of these bodies have bland, neutral-sounding names: the Institute of Economic Affairs (IEA), Policy Exchange, The Centre for Policy Studies. Their spokespeople are frequently appearing on BBC news bulletins and Radio 4 flagship programmes such as Today and The Moral Maze. All of the last group of think tanks promote a strongly right-wing small-state free market point of view. Several were founded by current and former Conservative politicians, including Margaret Thatcher, Keith Joseph and Michael Gove.

In the 1976 movie All the President’s Men, the lead characters used the dictum “follow the money” to find out what was going on behind the scenes at Watergate. What tends to characterize the right-wing groups, in addition to their bland-sounding names, is their lack of transparency about who funds them. A very useful organisation called WhoFundsYou? publishes an annual survey of the transparency or otherwise of the 20 best-known think tanks in the UK. They rank organisations from A to E, A being totally transparent and E being totally opaque.

The 2015 rankings make interesting reading. The “good guys” rated A are: CentreForum, Compass, Demos, Fabian Society, IPPR, New Economics Foundation, Progress, Resolution Foundation, ResPublica and Social Market Foundation. All but two are left-leaning and the others liberal or centrist in outlook. The “really bad guys” rated E are the Adam Smith Institute and the Taxpayers’ Alliance, both strongly right-wing. Rated D (mostly opaque) are the Centre for Policy Studies, Centre for Social Justice, Institute of Economic Affairs and Policy Exchange. All are right wing – even the confusingly named “Centre for Social Justice” founded by Iain Duncan Smith and Tim Montgomerie of the Conservative Home website. In the middle two B and C ratings are Policy Network, Reform, Civitas and the Smith Institute.

Do you spot a pattern here? It’s obvious: the more right-wing a think tank’s views are, the more obscure its sources of funding. To paraphrase the Home Secretary and heads of MI5 and MI6, if there’s nothing wrong, there’s nothing to hide. So, to turn again to the widespread opportunities for such organisations to get free airtime on the BBC. I think that the BBC Trust should issue a directive to producers that, unless an organisation meets a minimum level of funding transparency, its views should not be heard on the BBC. There will be times when the news item is itself as a result of a think tank’s activities: publication of a report, for example. In such cases, a suitably worded warning of caution is needed about the possible impartiality of the view expressed.

Internationally, Britain’s ruling classes have a notorious reputation for secrecy. Cap-doffing deference survived well into the 1960s and echoes of this survive to this day. In a 1980 episode of comedy series Yes Minister, “The Right to Know”, Sir Humphrey Appleby says that “there are some things it is better for a minister not to know.” A good real-world example is the lack of transparency in royal tax affairs which survived until relatively recently. There was a strong rear-guard action to more transparency and some aspects are obscured from public view to this day. Unlike countries with written constitutions like the USA and France, the public’s “right to know” has been conceded only in the face of fierce resistance from the “establishment”. The Freedom of Information Act 2000, passed by the Blair government, is hated by politicians and civil servants alike. In July, the government announced a review likely to lead to a chipping away of people’s right to know.

This culture of secrecy carries over into the world of the think tank. The international equivalent of WhoFundsYou? is called Transparify. Its 2015 report on think tanks makes interesting reading. It compares the degree of transparency in funding of think tanks grouped into 6 regions of the world. Transparify uses a slightly different scoring system, assigning 5 stars to wholly transparent funding arrangements, down to zero stars for totally opaque. Best overall is the USA, which has a long tradition of accountability and an average star score of 3.2. Next best is the EU, averaging 2.8 stars. However, a quote from the report says it all: “Taken as a group, British think tanks drag down the European average (2.0 stars versus 2.8 stars).” The EU average without the UK would be 3.1, close to the American figure. The spirit of Sir Humphrey lives on!

Think Tanks and the Thought Police

So, why are think tanks so popular as fronts for individuals, political parties, businesses and organisations with an agenda? Think again of the Overton Window. If your aim as a politician is to implement policies based on ideas even further to the right, there may be a political backlash if you express your views openly. So why not use the think tank funded by you, your friends or your funders to push an outlandish view and to police the boundaries of acceptability – or to push the window even further right?

So, see or hear the words “think tank”, think “thought police”. And memo to the BBC: No transparency, no airtime!!

1 thought on “Think Tanks? More Like the Thought Police!”