In 2000, I had a holiday visiting British friends then living in Colorado, USA. Whilst there, I hired a car and took myself off for a few days exploring the National Parks in Utah. Distances were long and driving alone gave me time for reflection. (In those pre-USB port days, the only radio options in that part of rural USA were country and western or Christian stations. So no radio, then.) I began to realise that I was spending quite a lot of my time driving with a slight sense of unease. It wasn’t just the unfamiliar car. Nor was it just driving on the opposite side of the road. Then it occurred to me. I seemed to be spending more time than normal driving without a clear view of the road ahead.

On reflection, it seems only natural that one feels more comfortable driving when there’s a clear, unimpeded view ahead. This will be either when there is no vehicle in front of you or, if there is, there is still a clear view through the rear window and the windscreen to afford an almost full view of the road ahead. This is the case for most of the time when I’m driving in the UK. What was different here was that I was in an average-sized family car, much like I’d be driving at home. But what was different was that, most of the time, the vehicle in front was bigger – taller – than mine and I couldn’t see through the tailgate.

So, I concluded, the folks here drive around in much larger lumps of metal on wheels than we do back home. Even my friends, who, in all other respects, were reasonably liberal and considerate people, had one of these great gas-guzzling beasts for day-to-day driving, for no apparently good reason. The physical laws of the universe require that moving such vehicles around consumes more fuel. It seems all part of the Great American Myth of the open western frontier and limitless resources.

A Friends of the Earth study from 2009 showed that the average American consumes twice as much of the Earth’s resources as the average European. That’s also nine times as much as the average African. There’s simply not enough Earth to go round if everyone on the planet adopted a European lifestyle, let alone an American one.

Oil was discovered in the USA in the 1850s and by the First World War the US was extracting two-thirds of the world’s crude oil supply. It’s now the third largest producer of crude in the world, after Saudi Arabia and Russia. The USA was self-sufficient in oil up to the 1950s and has been a net importer since. Imports currently account for about one quarter of consumption: a rapid fall after peaking at over half of consumption in 2005. If only Americans had consumed at the same rate as Europeans over the years, they would have remained self-sufficient.

There’s a direct link between this need for imported oil and international Islamic terrorism. A potted history follows.

Abd-al-Wahab proposed an extremist “back to basics” form of Islam in the late 18th century. A tribal leader Muhammed ibn Saud made a pact with al-Wahab: they would together bring the peninsula Arabs back to the “true” religion. The House of Saud remained just one of many Arab tribes until the fall of the Ottoman Empire after World War One. Britain’s and France’s “divide and rule” policies of the 1920s brought British recognition of the Saudi King’s right to rule the whole of what is now Saudi Arabia. British and US rivalry over oil discoveries in the region led to US recognition of the Saudi regime in 1933, 6 years after the UK. Oil was discovered there in 1938.

After WWII, increasing Western dependence on Saudi oil led to governments overlooking the abuse of human rights in Saudi Arabia. (Saudi is ranked equal bottom with 6 other countries in a list of 205 countries published by Freedom House. The comparison measures political rights and civil liberties.) This was of no great international importance until the 1973 oil crisis which led to a five-fold increase in the price of a barrel of crude oil. Saudi Arabia started to accumulate a financial “war chest” of petrodollars. Part of this pile of cash was then spent on spreading their warped form of Islam by funding madrasas and other means of radicalising Muslims throughout the world. For 30 years, the west continued to turn a blind eye to this international indoctrination: we needed their oil. 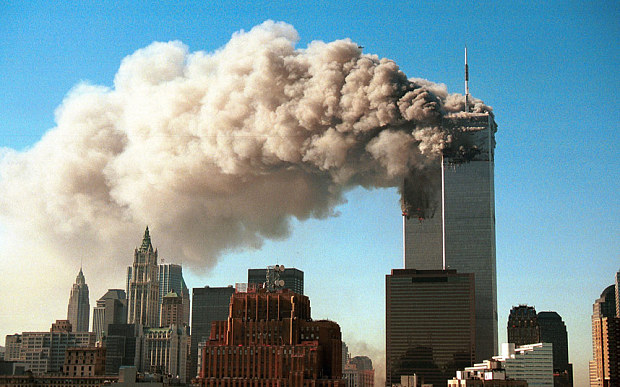 And then along came 9/11, all but two of the perpetrators being Saudi nationals. Still not much happened to the west’s attitude to the Saudis – at least in public. The various groups have now morphed and re-morphed into ever more extreme versions of their predecessors and funders: Taliban, Al Qaeda, Daesh (Islamic State). In its most mutant form, Daesh is even now biting the hand that (historically) fed it and the Saudis must be privately wondering what monster they have unleashed. (My earlier post Fairy Tales of Syria give a fuller account of all this).

And so, joining the links in the chain, US energy profligacy leads to terrorism (with a little help from the Saudis on the way).

What’s worse is that part of the linking mechanism is a fossil fuel: oil. Along with coal and natural gas, the developed western countries have been burning the stuff on a significant scale for about 200 years. Climate scientists now reckon that, cumulatively, we’ve burnt almost the maximum amount we can without catastrophic rises in global temperatures. I could stretch the “links in the chain” argument here to blame James Watt and his boiling kettle for global warming. Although this does seem to me to push the argument rather too far: the science did not exist in Watt’s time to know the climate effects of greenhouse gases.

This may seem a strange thing for an atheist like me to say, but there does seem to be something of the divine retribution in the devastating wildfires raging across northern Alberta. The fires are close to the area of extraction of fuel from tar sands – probably the most damagingly insane energy activity right now in relation to its effect on the global climate. The extraction process is grossly polluting to air and water supplies and the only sane policy is to leave the stuff in the ground. If not divine retribution, there are echoes of the Gaia principle, popular in the 1970s. Mother Earth fights back to save herself.

Look At the Road Ahead

All of which brings me back to my starting point. Hindsight is a wonderful thing. But if, at any stage in the sorry tale which got us to this point – with its dual threats of terrorism and climate change – we had considered the consequences of our actions (or inactions) we may have given ourselves a less bumpy ride on the road ahead.