Theresa May appears to have taken her gloves off in her approach to consulting the Scottish Government over the terms of the UK’s exit from the EU. The more conciliatory tone she used in her early days as PM has given way to something altogether more aggressive. The word “obsession” caught my eye from May’s speech to the Scottish Tories’ conference yesterday.

Obsession was what she accused Scottish First Minister Nicola Sturgeon and her Government of. Obsession, that is, with a drive for independence for Scotland. It strikes me that this term misses a glaringly obvious point. Sturgeon leads a government whose ruling party is the Scottish Nationalist Party. Pardon me, but its name is a bit of a giveaway. Its principal raison d’être is, by definition, to strive for Scottish independence. It’s a bit like criticising UKIP for banging on about leaving the EU. Or the Suffragettes obsessing about votes for women.

In a recent post, I spoke of Theresa May’s own obsession: immigration. Her choice to place control of immigration above all factors will, if carried through, lead to the most economically and socially damaging form of our exit from the EU. The economic case has been made repeatedly and I won’t repeat it here. But there are lots of examples in the media to illustrate the point, such as this tale of the Mini’s camshaft manufacture.

The list of heart-rending tales of inhamanity dished out regularly by the Home Office on both EU and non-EU citizens in their residency applications grows longer almost daily:

And so on and so on. As the man in the last case said: “someone should have a heart”. May ran the Home Office for six years, during which the bureaucratic nightmare of its handling of immigration issues steadily hardened. Setting the tone from the top of that Department, it’s clear May doesn’t “have a heart”. That’s made all the clearer by May’s stated intention of overturning the Lords amendment to the Article 50 bill guaranteeing rights for existing EU residents in the UK. She plans to ensure 3 million EU nationals and 1 million Brits living elsewhere in the EU are political pawns in the exit negotiations. No “heart” then, for the uncertainty and anxiety caused to 4 million people.

From her track record at the Home Office, disrespect for the democratically elected government of Scotland and disregard for the wishes of its people, May’s authoritarian streak shows more and more. I get the impression of a woman who has led a sheltered, middle-class life with narrow, socially conservative ideas and (as I said) an authoritarian streak. She shows no curiosity to actually find out or empathise what impact her government policies have on those who lead very different lives from her own circle. May’s words of concern for the “just about managing” are just that: words. There are no discernible actions or policies yet to back them up. The words stem from a cold-hearted political calculation, not from the heart. 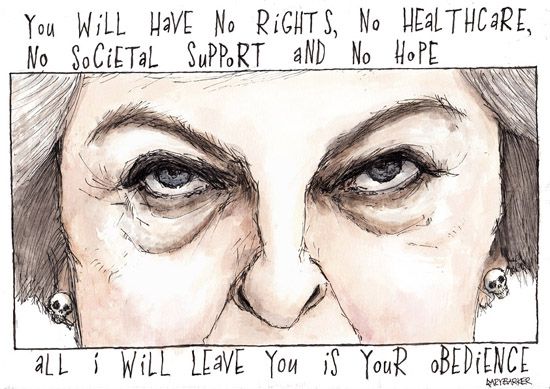 It’s ironic that it was May herself who warned the Tory Party conference in 2002 about their party’s image as the Nasty Party. In recent years, it seems she is the one above all who is reinforcing that image. With the Conservatives almost 20% ahead in the polls, May’s hubris continues to rise higher. As today’s Guardian says: “Mrs May subordinated economic policy to the pursuit of a myth of cultural indigenousness. History shows that leads to a spiral of ever more aggressive nativism.” It ends: “Mrs May, be warned: this won’t end well.” But, sadly, millions of the more vulnerable of us will suffer before she does.