What keeps you awake at night? I could say Theresa May’s mishandling of the EU negotiations and her attitude to the UK parliament. I could say the uselessness of our MPs, particularly the cowardice of the Tory members who vote for the government’s crap proposals out of a sense of fear and for party unity. What dreadful times we live in. Who knows how this week’s votes in Parliament will turn out – even if they all take place, according to some rumours.

Never have we been so badly served by our government and politicians, at least in my lifetime. Which is why I found the poster below, published, I think, by the @ByDonkeys twitter account, so appealing. Incompetents? Undoubtedly. Zombies, more like.

The truth, however, is that I’m currently sleeping well at night (in part thanks to my current medication).

I speculated recently that Theresa May has actually gone mad under the pressure of trying to appease both the insane and sane wings of her party and – nominally at least – to be Prime Minister. Perhaps so – but she really has turned into some kind of zombie. And, just look at the others in the picture above! “Invasion of the Zombies” would be an entirely appropriate title for a future movie based upon these troubled times. 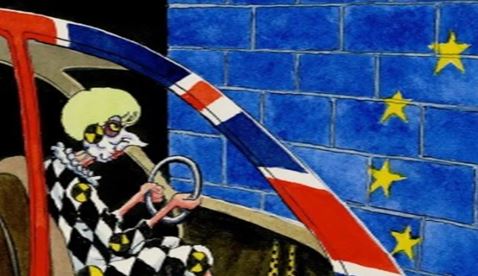 A crash test dummy could play Theresa May. Fill in your own names for others shown in the poster above.

I guess that the thought which could really disturb my sleep is this. Whatever happens this week, May will stand down (or be pushed out) as PM in a matter of months, if not weeks. Absolutely every likely successor for her in the Tory Party would give me nightmares! When do we start screaming? And why has Michael Gove been so deafeningly silent these past few weeks!