Have you had the feeling that Easter is really late this year? That’s because it is. It seems to jump around the calendar – which it does because of how it is calculated. Easter Day is on the first Sunday after the first Full Moon after 21 March. This means that it falls on dates between 22nd March and 25th April. Obvious, isn’t it? No. 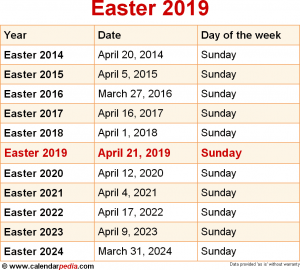 The consequences of having Easter jumping all over the calendar are not life-threatening, but they do cause some inconvenience. In my working life, my employer’s financial year went from 1st April to 31st March in the following year. Tax years go from 6th April to the following 5th April, mainly because the tax system didn’t adapt to the change of calendar in 1752. (The change from Julian to Gregorian calendar occurred in 1582 in most of the rest of Europe. For 170 years we were 10 days behind our neighbours (11 days after the year 1600: full explanation here.) Some familiar ring to that, I fear.

The upshot is that company and taxation financial years have 0, 1 or 2 Easter holidays – and sometimes only one of the two “bank” holidays. Confusing, eh? You bet. At work, we had to make adjustments for Easter when calculating “like for like” annual trend data, something that was quite important in my line of business.

Perhaps the biggest inconvenience arising from the variation in Easter dates is that which affects schools. The variability itself and the often huge difference in length between successive terms play havoc with curriculum planning and in preparing students for KS2 tests, GCSEs and A levels. Fixed length terms would solve this problem.

Until I did some research for this post, I had never heard of the Easter Act, legislation passed by the UK Parliament and which received royal assent in 1928. The Act fixes Easter as the first Sunday after the second Saturday in April. This would entirely eliminate the tax / financial year problem outlined above and would enable the Spring and Summer Terms in schools to be (approximately) fixed in length. So why didn’t it happen?

A full explanation can be found here. Briefly, Christian churches couldn’t agree amongst themselves. The Act contains the provision that, before it comes into effect, “regard shall be had to any opinion officially expressed by any Church or other Christian body”. The Act itself only requires Christian viewpoints to be considered: there is no religious veto. However, “successive governments have taken it to mean that the Act would not be brought into effect until there was a general consensus on the part of the various churches of the Christian faith as to when Easter should fall”. It seems absurd to me, in 21st century Britain, where 53% of us are “not religious” and only around a third of British people call themselves Christians, we’re stuck with this relic of more religious times. 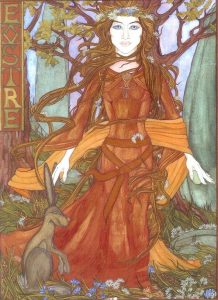 It’s broadly accepted that the English name for Easter is derived from the pagan goddess Eostre, and that this claim dates from the early 8th century by a monk known as the Venerable Bede. Or possibly, as in the German Ostern, from the word for “east” and its association with dawn and the vernal equinox. (Most other European languages’ words for Easter derive ultimately from Pesach, the Jewish Passover.) 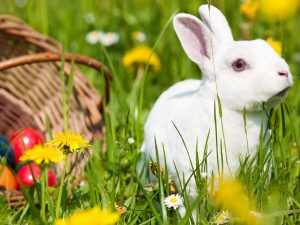 But does the Easter festival itself have pagan roots associated with spring, fertility and the equinox? My take is: probably. Here’s one view from the Guardian nine years ago. Eggs and bunnies seem to fit with this view.

But what about the Resurrection of Christ, central to Christian theology? Well, certainly Jesus of Nazareth was not the first who was attributed with resurrection. The dying-and-rising deity story can be found in Osiris, Tammuz, Adonis and Attis and Dionysus, derived from Ancient religions in the Near East. Both James Frazer in 1890 and Carl Jung in the 1950s analysed the frequent reference to dying-and-rising gods, often linked with the dying and regrowth of vegetation, e.g. crops in the Nile valley.

But what about the assertion in the Bible that Jesus waited until the third day to rise again? To be fair, here’s an American Christian explanation. None of that sounds particularly convincing to me! Here’s a much longer, and more thorough, analysis from someone who takes the opposite point of view. This account includes reference to the Sumerian moon goddess Inanna, the left eye of Horus (for all you Only Connect fans) and the Buddha. The latter is quoted, when dying, as saying to the animals of the Earth: “Do not weep, look at the moon! As the moon dying renews herself again, so shall I dying be renewed again.”

There is, of course, one natural phenomenon which can be said to “die and rise again” after 3 days. And I’ve already given the game away in the last quotation above. Every 29.5 days at New Moon, it can be said to “die” and reappear as a crescent after three days. The early Christian Church accommodated itself to many pagan rituals in order to ingratiate itself with the majority non-Christians at the time. For me, the most likely ultimate origin of the resurrection myth is in pagan moon-worship. Whether this was by directly adopting, and adapting, pagan rituals at the vernal equinox or via some pre-Christian dying-and-rising god myth is impossible to tell after 2000 years. But it does fit best with the annoying habit of Easter jumping around the calendar in accordance with the rising of the sun and the cycles of the moon! 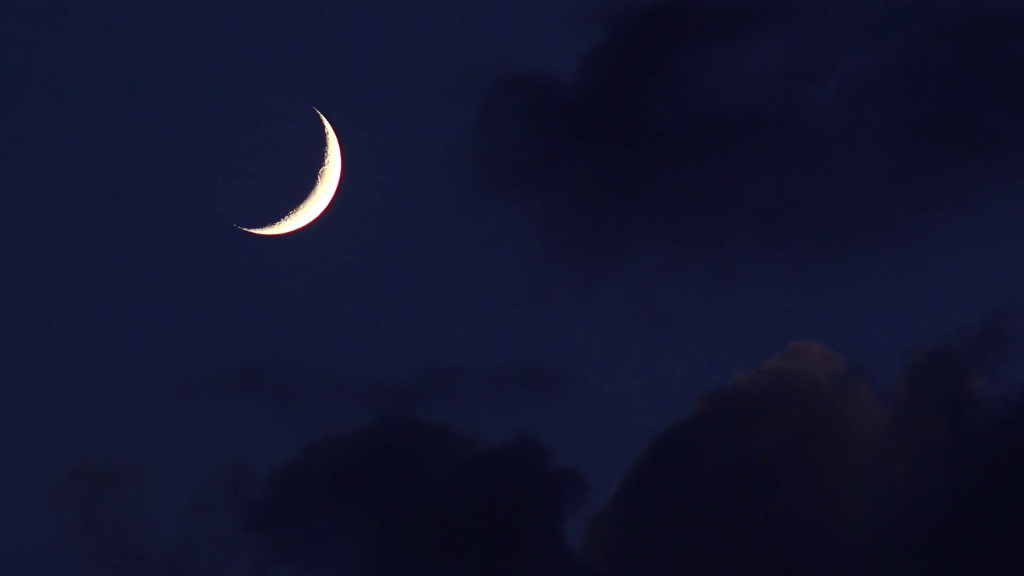 So, when the shops are all shut next Sunday and you’ve forgotten a key ingredient for dinner, don’t get angry! Just wait until dark, look up at the moon, and wonder….