Back in 2009, Adair Turner, former head of the CBI and the financial regulator FSA, called much of what the City of London does “socially useless”. In this post, I will explore this assertion, via a few other ideas on the way.

As a child, I remember receiving the occasional chain letter. In those days, it was an actual letter through the post. They were generally pretty benign. Typically the recipient was asked to do two things. Firstly, to write a letter to the person named at the top of a short list of names in the letter. Secondly, to copy (by hand) the letter to 4-5 friends, deleting the top name and adding your own name to the bottom of the list. By the miracle of the power of arithmetic, you would then receive a large number of letters from far-flung places. Writing 5 letters to the fifth person in the chain should theoretically bring you 3125 (5 to the power of 5) letters in return – if everyone plays the game. At each step, the total number of people needed is multiplied by five.

The problem is, after fourteen rounds, this system requires the entire population of the planet to take part: 5 to the power of 14 is about 6 billion. And then where do you go? So in practice, chain letters might work for a round or two and then quickly fizzle out.

A more sinister version of the chain letter is pyramid selling. 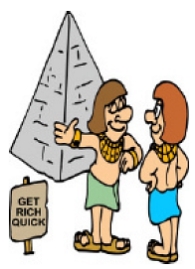 No, no that type. I’m not aware that the Egyptian government has followed Britain’s lead and is attempting to sell off the nation’s assets (usually these days to the Chinese). No, I’m talking about the illegal business practice of selling some spurious goods or service for an up-front fee. The rest of the scheme works much like the chain letter. The same multiplier effects come into play, as those people drawn in then try to sell on to a number of others. In practice, the very few at the top of the pyramid make all the money and a much larger group lose a little each. It’s a zero-sum game.

A Ponzi scheme works in much the same way. It relies on enticing investors into believing they will make unrealistically high returns on their outlays. Again, in practice, it’s usually only those in the know at the start who make any money. Again, the majority lose. A good example is the scheme set up by Max Bialystock and Leo Bloom in Mel Brooks’ The Producers. They sell shares many times over in failed Broadway musicals to rich “little old ladies” susceptible to Bialystock’s seductive(?) charms.

Much has been written over the years about the wonderfully innovative financial “products” dreamed up by City types since the sector was freed from too much nasty regulation. But what are these “products”?

Compare this to a typical financial “product”. These are investment schemes of one form or another, offering the opportunity of financial gain under conditions specified by the seller. The buyer trusts the seller to use his skills to maximize the prospects of a gain. The seller invariably minimizes his risk by taking his commission or fee up front. The seller then undertakes some form of speculative investment. If he does well, the buyer gets a profit. But where does this profit come from? The seller has used his knowledge to “play the market” to his advantage on behalf of the client. The only way this is achieved is by hundreds or thousands of other people losing a little each, just like in the pyramid selling scheme. These losses may take the form of actual investment losses or in consequential higher costs in other goods and services. No new wealth is created: this time it’s a win-lose game.

Who are the winners and losers in this game? The winners are likely to be those with spare cash to invest: mega-rich individuals and large multinationals – and of course the traders. The transfer of wealth from the many to the few doesn’t have to be very much for each transaction. Tiny margins will do, as the process goes round and round repeatedly. Cumulatively, the effect is massive. Remember from my earlier post Two Gamblers and a Pint of Lager that sums equal to the entire annual output of the UK are speculated in the City every day and a quarter.

As Aretha Franklin sang: “Chain, chain, chain… Chain of Fools”. And who are the fools? It’s us. Turner’s “socially useless” is putting it too kindly.