What is the “gospel truth”? It’s an expression we use when we assert something is true with absolute certainty. But hang on a minute… This is a piece about mistranslations in the Bible.

First, a bit of background. The most familiar version of the Bible in English is the King James edition of 1611. This was translated from Hebrew and Aramaic (Old Testament), from Greek (New Testament) and from Greek and Latin (Apocrypha – rarely reproduced in modern printings).

Ancient Hebrew, in written form, consists only of consonants. The vowels have to be inferred from the context or prior knowledge of the subject area. Consider this: “th cw jmpd vr th mn”. It’s easily recognized as a line from a well-known nursery rhyme. But suppose you came from a culture unfamiliar with the rhyme. Perhaps you’d think the most likely reading of this would be “the cow jumped over the man”. So we have a potential problem here. The chances that all 593,000 words of the Old Testament were correctly translated seem, well, a bit slim to me.

Secondly, it’s often hard to find a word in translation to convey the exact meaning of the original text. Here’s a famous example: “In the beginning was the Word” (John 1:1). The Greek original for “word”: λογος (logos) carries a wide range of meanings. Wikipedia devotes a whole page to it. Logos can be translated as “a ground”, “a plea”, “an opinion”, “an expectation”, “word”, “speech”, “account”, “to reason” or “a premise”. In ancient Greek philosophy (from Heraclitus), it is used as meaning “a principle of order or knowledge”. The King James translators hardly do justice to John’s original. This is just one example out of thousands (around 181,000 in the New Testament). 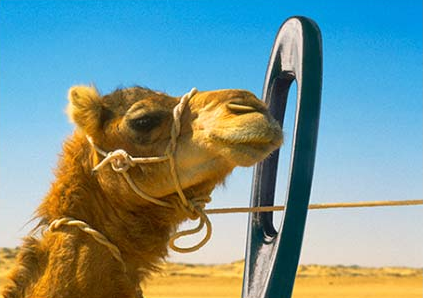 One of the most striking of soundbites attributed to Jesus is the one stating that it’s easier for a camel to pass through the eye of a needle than for a rich man to enter the kingdom of God (Matthew 19:24 et al). (A similar phrase can be found in the Quran.) I was once told this is a mistranslation and so I did some research.

So, basically, I just don’t know which version is true, but the implications for the theology between version one and the other three are significant. I’ll leave that to the theologians to thrash out.

Add to all the above the fact that, for the first 1400 years, there was no printing press and copies had to be made by hand. Were these always made without error? I doubt that. So, all in all, the things that you’re liable to read in the Bible: don’t treat them as gospel!