Regular readers of this blog will know that I have banged on many a time about economic policy: Free Market Fundamentalism, as I call it. It is one of the two major delusions from which the country is suffering. We have suffered the consequences of a fatally flawed view of human economic behaviour for over 35 years.

Over a similar time frame, a second delusion has taken hold, growing to overwhelm us in a moment of supreme folly on 23rd June last year. It is the delusion that Britain would be better off outside the European Union. To make my position absolutely clear: it is 100% certain that every possible outcome from EU trade negotiations about the UK’s trading position outside the EU will be worse than the status quo. Every option would be worse; it’s only a matter of “by how much”. 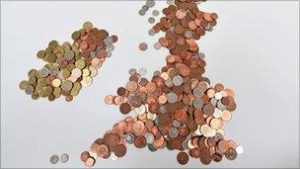 To overcome a delusion, first the “penny must drop” to the sufferer that they are mistaken. No progress can be made during the period of denial. As I said in my recent post, Take Back Control, I believe that, at long last, the penny has dropped for an increasing number of Britons that there’s something fundamentally wrong about our economic system. The Labour Party get this; the Tories not, so far. That’s bad news for the Tories and good news for those of us who think that they’ve been wrong all these years. But we also need the second penny to drop: that staying in the EU is the UK’s best conceivable option. That penny hasn’t dropped – yet.

There was a whole load of bollocks spoken by the Remain Tories, and in particular by Osborne and Cameron, during the EU referendum debate last year. Their opponents, with some justification, called it “Project Fear”. (In comparison, the Leave campaign should be dubbed “Project Outright Lies”.) It was a source of immense frustration that the debate, as reported by the media, was conducted solely by the two opposing wings of the Tory Party (with some vile “sounds off” on the extreme right by UKIP). The economy didn’t crash and burn within days of the referendum result (although the pound did drop sharply); its death was always going to be a slow, lingering one, barely started even now.

The 2017 Election: The First Penny

Of the two delusions mentioned above, the result of the 8th June general election shows, I think, that the first penny has dropped. Increasing numbers of voters are sick of austerity and can see for themselves that it’s not working. For obvious reasons, the rich tend to save a higher proportion of their income than the poor. By taking money from the poorest, Osborne plunged the economy back into a needless recession in the early 2010s, reducing his tax income, increasing the need for benefits and made his target of balancing the books harder to achieve.

The effects of the remorseless downward pressure on public sector expenditure (instead of, for example, raising taxes on the wealthiest) didn’t really seem to have much effect at first. But by now, the cumulative effect is apparent in many different places. The struggles to maintain standards in the NHS have been all to plain to see for some time now. Then teachers and parents are concerned about the cuts to school budgets and their effect on class sizes, curriculum options and much more. More recently, damning evidence of the collapse in discipline in our prisons was made clear by the Chief Inspector of Prisons. The fact that not a single youth custody centre is safe to house young offenders is a spectacular disgrace for a relatively rich country in the 21st century. Police, firefighters, paramedics, doctors and nurses have rallied round time and again in recent months dealing with the aftermath of terrorist attacks. Failure over seven years to give them a decent pay rise is increasingly seen as unfair. And squeezed living standards from rising inflation are affecting all but the very richest in work and those on benefits alike. I could add low growth, record levels of personal debt and of the trade deficit, as well as many other economic weaknesses.

The delusion that Free Market Fundamentalism creates a strong economy is falling away fast. That leaves one more penny to drop.

One year on, there’s still a large minority of the population who feel justified to have voted Leave last June. These include several members of Theresa May’s cabinet, including those most involved in negotiating terms for our departure. But with no overall strategy from May, even they are disagreeing among themselves about how hard a task they’ve set themselves. The most delusional, Liam Fox, said negotiating a trade deal with the EU would be “one of the easiest in human history”. David Davis, by contrast, described it as more difficult than a moon landing: “Half of my task is running a set of projects that make the Nasa moon shot look quite simple,” he said. I’m glad to see that he turned up in Brussels this week fully briefed and prepared:

About 45% of the UK’s trade is within the EU. The 27 countries share culture, values and ideals most like our own. (For example, the USA is, culturally and in social attitude, a very alien place indeed!) Fox and his ilk seem to think the world outside the EU is just waiting for us to leave so they can start doing a whole lot more business with us. In practice, Fox is swanning around the world, at our expense, trying to do business with a combination of the “old Commonwealth” (i.e. the white folks) and a bunch of despots and human rights abusers. With the latter group, the talk seems mainly about selling them arms. Just like old times in the Ministry of Defence, mixed with nostalgia for the days of the Empire.

The likelihood that such trade could fill more than a tiny fraction of that lost within Europe is zilch. Nada. Nothing. How long will it take and how much damage will be done to our economy and to our national reputation before the second penny drops? I hope it’s soon, for all our sakes.