I only ever attended one Employment Tribunal during my career, about twenty years ago – and I found it a bit of a pain and a waste of time. So, at first sight, you might think I have some sympathy for the headline in today’s Daily Mail: 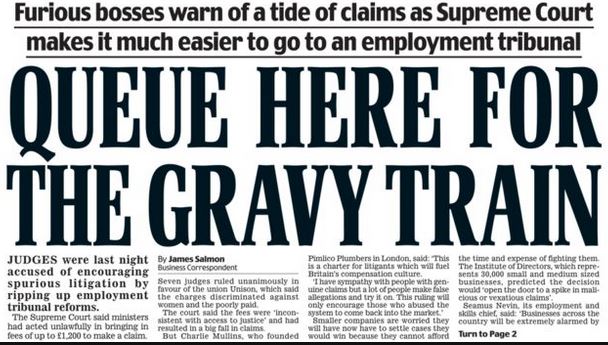 My presence was required at an Employment Tribunal as a result of a grievance claim from a former member of staff who was dismissed for gross misconduct. I was the senior manager and the final step in the company’s appeals process: I had dismissed the appeal and upheld the sacking. The offence was theft of a small amount of cash. We had a clear policy on this type of misconduct: the nature of the work required a high degree of trusting our staff and the hard line was pour décourager les autres.

The case took two days and was held in Croydon: a two hour journey each way from home. The tribunal dismissed the claim and awarded us costs. I admit to feeling slightly sorry for the guy, for his poor judgement and false hope in thinking he had a case. But I was also irritated by the – to me – waste of everybody’s time. Was the case “spurious”, to use the Mail’s language? In their eyes, probably yes, but I felt that “misguided” would be a more accurate term.

Fast forward to 2013. Justice Secretary Chris Grayling introduced fees for ETs, of up to £1200 for the more complex cases – extra if there were appeals. The reason Graying gave was to deter “vexatious” cases, an assertion made without conducting any research into the verity of his statement. Volumes of cases fell dramatically, by more than 70%. If the assertion that fees would deter the more frivolous and less worthy cases, the success rate of the remaining volume of cases would have risen. In fact, the opposite occurred. The logical conclusion was that most claimants who would have succeeded in the past had been deterred from claiming: a denial of justice.

As an advisor in the past four years, many times I’ve given advice to clients on employment issues. They had a valid claim against a rogue employer who has cheated them out of money or discriminated against them. But when told of the fees, they decide not to proceed. Very often this is simply that they cannot afford the money. Sometimes they’re advised to sue in the county court instead, because this is cheaper. This was correct advice, but absurd when you consider that the Employment Tribunal system was created as a better-matched and less intimidating way than the courts for mistreated employees to seek justice. 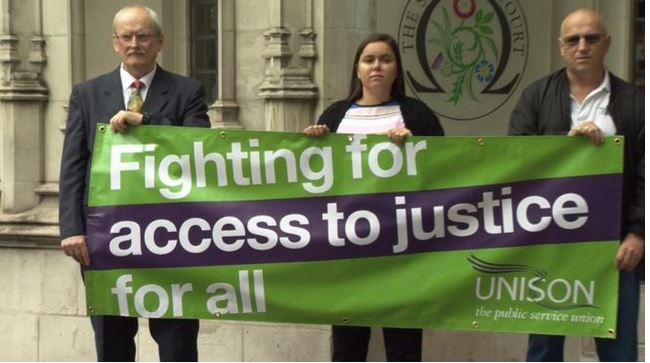 So I was delighted to see the news that Dave Prentice and the Unison union have persevered in their legal fight against tribunal fees – and won. The Supreme Court ruled that fees were a denial of justice and were unlawful. The decision of the five judges was unanimous. Grayling’s policy changes when Justice Secretary have been ruled unlawful before. But this time, the Supreme Court went further. In one paragraph of their ruling, they effectively lectured the Government on some basic truths about our constitution. It’s worth reading in full (the emphasis is mine):

Now, that’s basically what’s called a bollocking! Call it teaching grandmother to suck eggs, if you like. The “enemies of the people” (Daily Mail style) yesterday called out those who are the real enemies of the people in this case: the Government in trying to defend the unlawful actions of an earlier Tory Justice Minister. The Court ruling has been called a “lesson in patriotism” in a powerful article by Afua Hirsch in today’s Guardian.

So, the Mail did what it always does: take a news story and spin it to the opposite of the truth. It again confirms their attitude to the law. It’s fine when it’s used by the rich and powerful to bully and intimidate others into getting their own way. It’s the law as a plaything of the rich: super-injunctions to suppress awkward facts and expensive divorce settlements for spouses of billionaires. But the law as a bulwark to protect the rights of the poor and exploited? No way. There’s a word for this attitude: feudal.

And as for my irritation at the two days I spent in Croydon all those years ago? Put it down as the necessary price to pay to protect those freedoms we have gradually wrested from those in power, over the past 800 years since Magna Carta.