Firstly, congratulations to France for winning the World Cup 2018. In our parochial, patriotic fervour to heap praise upon England’s young team, British commentators seem to have overlooked the fact that France’s footballers were even younger.

Congratulations too to Croatia for being runners-up: a great achievement for a country of only four and a half million people.

And congratulations to Gareth Southgate and the England squad for making it through to the final four.  I must admit to getting rather swept up in all the World Cup excitement.

It’s been a very long time since the old adage “Don’t mix sport and politics” was discredited. Sport and politics are inextricably linked, to misquote Carl von Clausewitz. Particularly when it comes to FIFA, organisers of the football World Cup, throw in a shedload of corruption and backhanders and you can begin to understand their decision to award the World Cup to Russia and, above all, to Qatar in 2022. Putin and his mates come out of this with nearly all commentators singing the praises of the Russians for a well-organised set of games.

Briefly, the British (or at least the English) forgot that we had torn ourselves apart over leaving the EU and got behind our team. Let’s hope the French can do the same and disavow the fact that Marine Le Pen made it through to the last two in the Presidential Election.

Straddling the world of football and politics, look at these three heads of state:

The two on the left, Emmanuel Macron and Kolinda Grabar-Kitarovic, were democratically elected; the one on the right was foisted on us 66 years ago: we had no say in the matter. The pro-Leave fantasists speak of “global Britain”, open to trade with the world. Which of the above three would you want to be the public face of your country? For my money, certainly not the one on the right wearing a stupid blue hat. Little Betty has her standard bored face – she’s got the Trumps either side of her in this cropped picture – but she could be anywhere.

I think it’s needlessly cruel to drag a 92 year-old woman out from one of her cosy palaces to meet a thug and his moll, and the whole monarchy idea is positively feudal. But Trump got his tea and his photo-op.

Trump got his pomp too. May’s government, whilst failing to actually govern the country, found time to lay it on thick, and at vast expense.

Trump was whisked in his own little bubble of self-delusion: Blenheim, Sandhurst, Windsor and Chequers.

And, at Chequers, Trump got his hands on Theresa May again, just to show who’s boss.

The Daily Mail did its hate-filled best to spin the story: 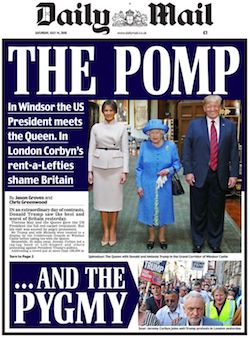 In the real world, 250,000 in London alone, plus other centres turned out to make it clear Trump wasn’t welcome here. The Twittersphere was awash with comments from people about the Mail’s pathetic “rent-a-leftie” barb. Most were bemused or wondering, ironically, when Corbyn was going to send them their payment for turning up to protest. We’ve got another four months before hater-in-chief Dacre finally retires. Fuck off now, I say.

The protesters obviously occupy the moral high ground here. But, in the longer term, Trump, in his bubble, will still have his photo-ops to show. So probably a score draw in the end.

But there’s one picture from the football final which may come back to haunt Vladimir Putin: it’s this one:

Look at the body language here. Macron and Grabar-Kitarovic are standing in the pouring rain, getting wet and enjoying every moment. Hard man Putin has ensured he’s the only one under an umbrella: dry, if not exactly high: he’s quite short. In the long term, even hard men need friends, not just people who are nice to him out of fear. Right now, Putin has Trump as his only true friend. So, another score draw, at best.