I don’t want to live in a society where I have to shop around every few months for my energy supply to stop me being ripped off by my current supplier. 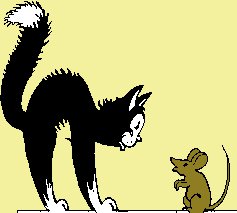 Since our former public monopoly gas and electricity suppliers were privatised by the Thatcher government in the 1980s, the private companies that replaced them have been playing a game of cat and mouse on two fronts:

With Ofgem, this has mainly taken the form of a bewildering mix of different tariffs, designed to make it as difficult as possible to compare prices.

The game with customers mainly focussed on winning market share in an oligopolistic market. The consequence is to offer discounts and/or more attractive tariff packages to new customers, whilst pushing up prices to existing ones. In other words, customer loyalty is penalised and everyone has to play the game of shopping around.

The energy companies didn’t invent this practice: the insurance industry led the way, as they institutionalised greed and treating their customers as a cash cow. The phone companies have also jumped onto this bandwagon.

Even at the time the companies were privatised, I felt the idea was wrong. Gas and electricity retailing is a natural monopoly: it’s the same gas and electricity coming down the pipes and wires regardless of whom your contract is with. These industries do not form a natural market: such competition as exists is on the periphery of the service – billing and customer service – and not on the core offer.

Matters were made worse when the wholesale supply and distribution business was privatised a few years later. These industries require long-term investment, for example, in new power stations. Also, there are major externalities, such as climate change and air pollution, which should be factored in at a strategic level. Similarly, security of supply is paramount, given how much of modern life is dependent on these supplies always being there. Short-term focussed, profit-maximizing competing companies don’t match these needs.

Have consumers benefited from cheaper prices or better services? I doubt it, at least in the longer term. There may have been some price cutting to benefit consumers in the early days, but prices have risen faster in recent years and I am convinced we’re paying more now than we would have done under public ownership. Like the petrol retailers, gas and electricity companies are quick to raise the retail price when the wholesale price rises, and very slow to lower it when the wholesale price falls. Furthermore, the various comparison websites will quickly tell you how patchy customer service is.

What got us into this sorry mess is the mindless application of the dogma I described as “free market fundamentalism” in my earlier post Some Are More Equal. If you have a basic universal need for energy like gas and electricity, what’s wrong with it being met by an organisation driven from top to bottom by a commitment to public service principles?

1 thought on “Cat and Mouse”